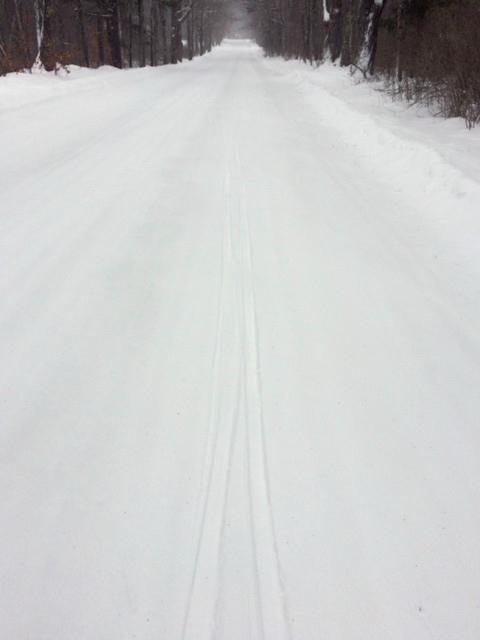 Sunday’s storm wasn’t all it was forecast to be.  Even so, it was bitingly cold, blowy, and beautiful.  And, on a weekend, which meant the side roads went unplowed for hours at a time.  Road Skiing!

I was looking for company on my adventure, but my family was all involved in projects of their own.

No matter. I headed out alone.

The windblown, once plowed (but not sanded!) road was perfect for skiing, though without quite enough snow for a satisfying pole plant. Through some wonder of ancient fiber, modern-day ingenuity, and middle-aged metabolism in less half a mile I began to feel the sweat trickle between my shoulder blades. I trudged uphill, past the neighbor plowing out his daughter’s house, granddaughter in a snowsuit waving from the porch.

At Crosspatch Farm I started the gradual glide downhill to the humming of unseen snowmobiles on the lake beyond the snowy cornfields. I reached the end of the road breathing hard and stood for a minute in the near silence of blowing snow and frozen trees. On one side an open cattle pasture, on the other tall stands of oak and red maple. All of us being pelted with ice.

I tugged my furry cap lower and turned back, into the wind.

Huddled in, plowing forward as I was, I got to thinking.

First, that I hoped I’d make it home before the plow truck came leaving me to either walk home in ski boots carrying my skis or have to slog a mile through 10 inches of snow across my neighbors’ front lawns.

Secondly, and this is really the point of all this, I thought about the irony of parenting:

I reflected on the many times in those early years of parenting, when I’d stuffed my kids into outdoor gear and strapped them to my body, or to some other device for transporting and hauled them out into the snow/rain/sun/wind, just to escape the humdrum of being inside, alone, with very small children. When what I really needed was to be moving, out in nature alone.

Then, the countless hours spent strapping them into gear (snowshoes, skates, bike helmets, skis) and coaxed, tugged, balanced, carried, all at a crawling pace in the name of teaching a skill and sharing something fun–mostly it was–but oh the patience required.

And that now, as the parent of teens, when I spend so many days moving my body unencumbered by clinging hands or diaper bags, or snacks and sippy cups, when most of my time is spent free of childcare, now is when I get to ski alone.

It strikes me now, after the fact, that a better writer would craft this so as to be cyclical and somehow stitch these mental threads together into some beautiful product. But, as it’s taken me 4 months since my last post, I know that stopping to re-write would mean it doesn’t get finished.

So here it is, cliched though it is, and as raw as when it occurred to me as the ice in my face.

All of the hand holding, clinging, piggybacking, is so in the end we can both let go.

It wasn’t much of a storm. But the skiing is still swell.

3 thoughts on “The Point of it All”

The view from here: see more in my gallery 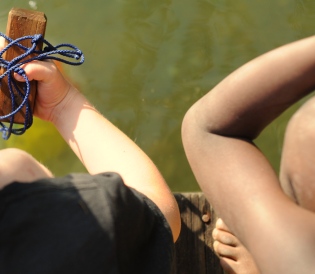 To read posts before December 2014 go to: http://frogwaterfarm.blogspot.com/

All pictures and words belong to Frogwater Farm. While I'd be flattered if you wanted to use them, It'd be a real bummer if you didn't ask first. Please be kind. Thanks for reading.

"The plain fact is that the planet does not need more successful people. But it does desperately need more peacemakers, healers, restorers, storytellers, and lovers of every kind. It needs people who live well in their places. It needs people of moral courage willing to join the fight to make the world habitable and humane. And these qualities have little to do with success as we have defined it." -David Orr, Simple Properity